A song about the overwhelming emotions that eat you up during the pandemic, key themes for the video were the disruption of reality through glitches, a constant descent, and the cyclical and monotonous nature of life under the Covid.
________
Tools
Camera: Canon 6D
VFX: Blender, After Effects
Editing: Premiere Pro

Roles
Artist: SSAADAN (https://twitter.com/galgorillaZ)
Everything else: ADC (me)
________
At the beginning of 2021, I had the small revelation that I need to make things to be happy, and that I missed being on a set after shooting my last film as DP 3 years ago. Being a college student then, each member of the former team I belonged to had gone their separate ways at that point, and it was clear that I had to put on a lot more caps than I ever had before.

Luckily, the ever-generous and my former classmate SSAADAN had just started putting out music, and was generous enough to trust me to direct his first music video.
I directed, shot, edited, and did the VFX for every part of it, and while each part took incredibly longer than I'd originally thought, I finally got everything together and finished my first project as a director.

Whether or not I succeeded in conveying the above themes is another question entirely, and I will admit it only ended up being 70% of my original vision.
But, I didn't expect it to be great off the bat. I'm uncharacteristically proud of my work because it's done. I'm proud that I have something to point at and say "Oh boy, this part looks terrible!", and learn from.
Now I just have to rinse and repeat until I suck just a bit less.

I'm very eager to meet new creatives, so hit me up if you need some help or just want to talk! 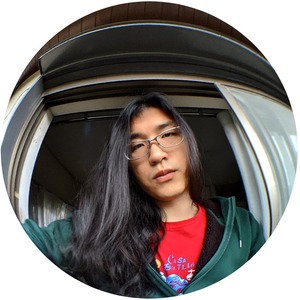 Born in Japan, raised in Colorado. Likes photography, tech, illustration, architecture, and any image that moves.