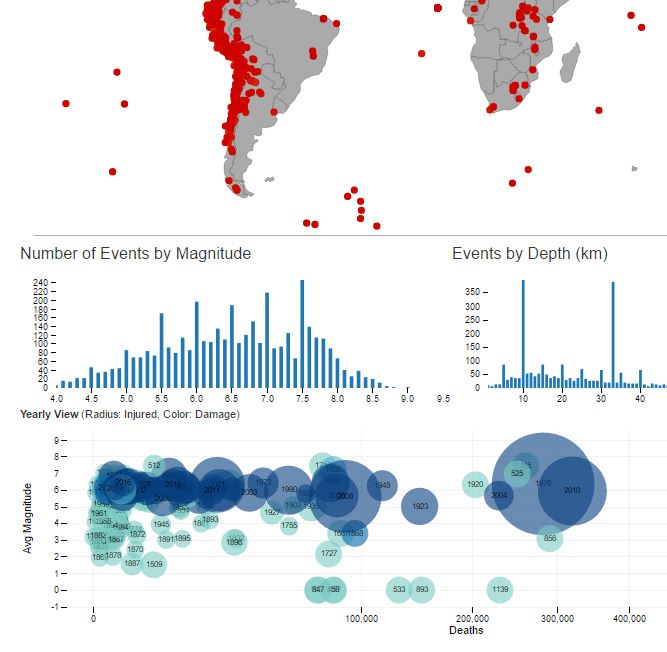 Interactive Data Visualization & Exploration
Check it out at: http://www.sonicviz.com/wp/2016/10/28/earthquake-data-scope/

I recently attended the Rakuten Technology Conference 2016 and saw a very interesting presentation from Erik Berlow titled “Next-Generation Interfaces for Thinking with Data“.

I’m familiar with Data Science, data mining, and data visualization and have been working with a few tools, from RapidMiner to cloud based ML platforms such as IBM Watson, Microsoft, Amazon, & Google.

Erik opened my eyes to some new ways of looking at the problem of constructing visualization and analysis tools in an increasingly data saturated world. He introduced the concept of Data Scopes, interactive tools for exploring multidimensional data and inter-relationships using the human visual system as the pattern recognition engine. The data can be pre-processed with Machine Learning to slice, dice, and remix to provide a rich content source for the visual interfaces to explore.

So I decided to do some prototyping and see what I could come up with to explore the Data Scope concept at a basic level. There are a wealth of great open source Javascript libraries for visualization around, so I focused on DC.js, which is mashup of the well known D3 library for manipulating data documents and Crossfilter, a multivariate dataset explorer library originally released by Square.
Living in quake city (Tokyo) I decided to start with the NOAA Global Significant Earthquake Database, 2150 BC to present for this exercise.

As anyone who has worked with data science will tell you, massaging the data into shape is usually the most time consuming and painful part of the process. Garbage in, Garbage out as the old computer saying goes! I actually asked Erik in the Q&A what his processes were to clean the data, and he made the interesting comment that Data Scopes are also useful for rapidly detecting anomalous data.

That’s why this earthquake data set is a great example because it has lots of missing data, in addition to lots of useful data.