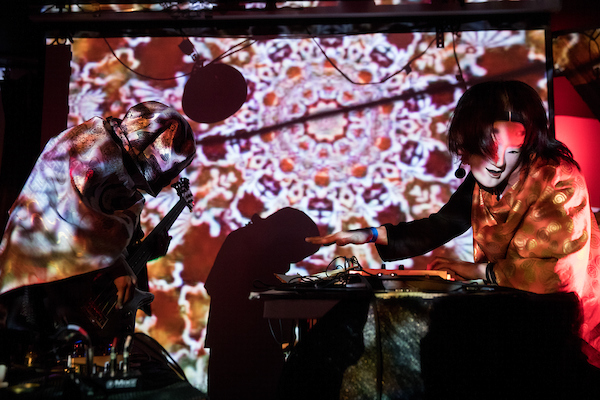 Gaiamamoo is an experimental improvisation unit formed in 2012 by two musicians based in Tokyo. Shogo Haraguchi (fretless bass/pedals/iPad) and Mehata Sentimental Legend (vocal/electronics). They started to play around Koenji, toured four northern and southern cities in Spain next year. And they extend their performance field not only at gig venues but also they performed at art galleries with visual video. Thorough the experience, they gradually made their own style and found a way out of sounds of Japanese origin which are flavors of Japanoise and Noh. Then creatively and experimentally shift them to fit their improvisation. In 2015, they were chosen by festival Sound Live Tokyo which is organized by PARC and performed on “New Sound Sanctuary” at SDLX, Tokyo Roppongi. Carried out their first NYC tour in 2016, and one of their performance “Live at The Sump” was streamcast on Ridgewood Radio show from NY. They appeared on Festes Majors Alternatives de Vallcarca 2016 (Barcelona, Spain) and 8 hours modern Japanoise marathon Festival GIGANOISE 2 (Tokyo, Japan, 2016).
https://www.facebook.com/Gaiamamoo/

I am Visual Artist and also am Musician of Japanese Noise / Experimental music in Tokyo, Japan. I sometimes have activities in Abroad also.

Collaboration Work
I am really happy to announce about the collaboration tra...
See full profile