This story was originally published on medium.com

People coming, people going, people staying. And every one of those people, in that moment, alive.

What a wondrous thing, I thought.

To be alive, and to be safe.

The world is a delicate interweaving of souls.

It tears itself apart, it puts itself together.

And over and over. Again and again.

But for how long?

I once thought that to be in touch with every life as it sputters, or halts, or fades to a stop might simply be too much for a person to handle.

A weight impossible to carry alone.

But even one life, all on its own, can be impossibly heavy.

And somewhere in all of that, hope?

I want to write something bright and happy. Something simple and beautiful. Something in which a boy meets a girl, and coincidence brings them together, and fate helps them fall in love.

Something where the characters could be any race, or any age, and anywhere in the world.

And no guns. Never any guns.

I sometimes look for the seeds of that story, like fumbling around for a pen in a desk drawer.

I can never seem to find it.

It is a strange thing to watch a world burn from a distance. To feel sad for a people who are not your own, and lives you will never know, and souls you will never meet.

To only see that they were taken, in the title of a news story.

It is strange to feel despair for a very special kind of pain — one you are fortunate to not understand completely.

But sometimes, to watch a fire burn and do nothing, is to invite that fire to spread.

I wrote two stories about love, and loss, and death. Little lives in little worlds that might mean nothing, but feel in a moment, like everything.

I was chasing something. A very particular feeling — the wrapping of a mind and soul around the idea of losing what is irreplaceable.

The weight of a single life.

Still so much heavier than we think.

Perhaps it is fear — an understanding that chaos and tragedy in a city far from your own is a sign that the world is not easily fixed. That even when you cannot see the pain, or feel it, it is still inflicted.

You can turn away, but it still cuts, and gouges, and scars, and kills.

I wonder, how do you fix a problem that is a world of its own?

How do you make a start on changing the world?

That lives are sometimes taken before they are ready to go, or before we are ready for them to go, is something we will always struggle with.

But when, in a different world — a better, brighter world — it might never have happened?

That is when it becomes an injustice.

Sometimes it all feels like too deep an answer to go looking for. Too complex a puzzle to solve. Too tangled a set of knots to know where to start the untangling.

For a time I thought, this is not my set of knots to untangle.

And I knew these words to be true.

I knew them also to be excuses.

I write because it is all I have.

And I want to believe that words can still touch hearts and mend souls.

I want to believe in us.

The idea is that the right words might change a life.

Maybe just one, and just for a moment.

The idea is that the world might feel a split second of kindness, and love, through the heart of that one life.

A life that gets a little lighter.

And a lightness that spreads.

If I could write those words, they would still not be enough.

But they would be a start.

And so I listened to the flow of life bleeding from a single, half-open window.

What a wondrous thing, I thought.

To be alive, and to be safe.

And to be hopeful. 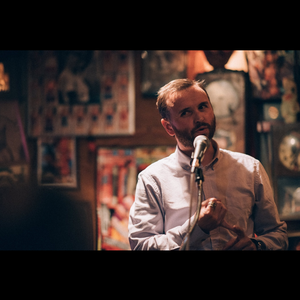 The HT Podcast - Drunk Coffee
This is the debut episode of the HT Podcast, my newest pr...
See full profile